A must read for children - The Adventure of Horatio Mowzl 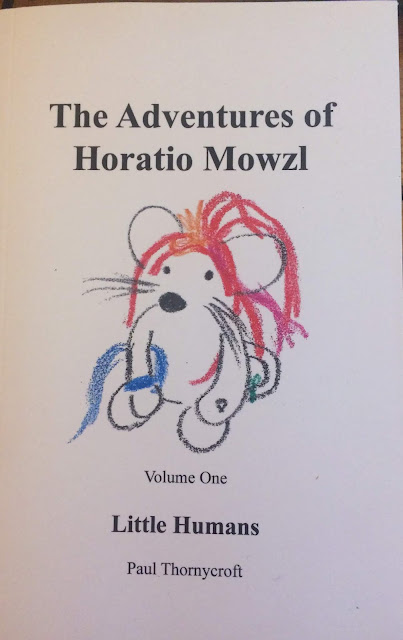 Mya-Rose: What are your books about?
Paul: The Mowzl books are about rediscovering the healing magic of the natural world and realising how the damage to Nature caused by human activity has reached a crisis point.

Mya-Rose: Why is it a fairy-story if you want to look at real-world issues?
Paul: Because the dominant culture and world view is, unfortunately, one of duality.  The global economy depends upon the exploitation of Nature, a behaviour requiring the suppression of sensitivity and empathy.  In fact, Nature is not dualistic, rather it is infinitely complex and nuanced.  The Mowzl books bring together fairy-story and ‘real world’ drama to allow space for something magical to happen in the way we experience meaning.

Mya-Rose: You have been working on these books for nearly ten years; what made you begin?
Paul: I’m 70 years old, I’ve witnessed 7 decades of climate breakdown and ecological collapse on a global scale.  Politicians, and the corporations that control them have no consciousness of the significance of what is happening.  It is children –– who are inheriting a broken world –– that are now making the leap needed to trigger change on a meaningful scale.

Mya-Rose: In the years you’ve been writing the books, what have you seen change in the world?
Paul: I’ve seen the ecological catastrophe unfolding faster than even the gloomiest scientists predicted; I’ve seen conflict and competition for resources escalate at a time when global cooperation could be the chosen way forward. Encouragingly, I have also seen children find their voice!  For example, Greta Thunberg, 16-year-old Swedish schoolgirl who has triggered, by means of her solo activism against climate inaction, a worldwide movement: #climatestrike.  The Mowzl books are my way to contribute to this rising wave of change.

Mya-Rose: Thank you, Paul, you are clearly passionate about this!  When does Volume Two come out?  What’s it called?

Paul: Volume Two is called “First Purlings” and is due out in April 2019.  There’s more info at www.mowzl.co.uk

Mya-Rose: And Volume Three?
Paul: Ah!  That’s under wraps for the moment, but I hope it will be released in time for Christmas 2019!

Mya-Rose: Thank you for talking to me about your writing.
Paul: It’s a pleasure and thank you for your interest and willingness to post this interview as a blog.

This book inspired me – and hopefully others too – to do as much as we can to repair the wild web. It’s great that it’s addressing what we’ve done to the Earth, as so many people need to start helping the environment.  I think the world would be a much better place if everyone read this book!  Can’t wait for the next book!

I decided to Google Mowzl to see if it was available online and was surprised but pleased to see that he has a website, Facebook and Twitter page! I think this will spread the word to help our planet.

My Aunt (Chuto Ma) Mya-Rose gave me this book to read and I really loved it. I don't usually like reading but I enjoyed hearing about Horatio Mowzl, a mouse from the future, as the story was exciting and so I just kept reading.

Mya-Rose Craig is a 16-year-old young British Bangladeshi birder, naturalist, conservationist, environmentalist, activist, writer and speaker. She is based near Bristol and writes posts about birding, conservation and environmental issues  from around the world.

She has been involved in the UK organisation of the Youth Strikes encouraging young people from around the world to not go to school once a month and protest instead demanding immediate action to prevent climate breakdown. This is an interview in New Statesman.

She was a Bristol European Green Capital Ambassador along with Kevin McCloud, Hugh Fearnley-Whittingstall, Tony Juniper, Simon King, Miranda Krestovnikoff and Shaun the Sheep! See the full list of Bristol Ambassadors. She has also been listed with the singer-songwriter George Ezra and actress Maisie Williams from Game of Thrones as one of Bristol's most influential young people.

She organised four narure camps for children and teenagers since 2015 and is helping to run four more in 2019. She also organised a conference, Race Equality in Nature, in June 2016 aiming to increase the ethnic diversity in nature and plans two more in 2019. She has also set up Black2Nature with the aim of working with organisations to increase the access to nature of Visible Minority Ethnic people and is President. Please connect with her on LinkedIn (Mya-Rose Birdgirl Craig) so that she can invite you to join the Race Equality in Nature LinkedIn Group and be part of the change.

She has given over 50 talks, speaking at conferences such as being on a panel with George Monbiot and Caroline Lucas on Sustainability and the Future of Cities. She is a Minister in Chris Packham's Manifesto for Nature in 2018 and spoke in front of 10,000 people at the Walk for Nature. She has also appeared on TV and radio and is particularly proud of being in Silent Roars, a short film which was part of Listen to Britain 2017 https://player.bfi.org.uk/free/film/watch-the-silent-roars-2017-online.

She has been awarded the Bath and West Show Environmental Youth Award 2017 for Bristol for her Black2Nature work EYA 2017. She was also listed as one of Bristol's BME top 100 powerlist.

She loved seeing Mountain Gorillas in East Africa and Penguins in Antarctica over Christmas 2015, her 7th continent. She became the youngest person to see 5000 birds in 2019 age 16 and is looking forward to visiting Brazil birding in 2019 and hopes to see half the birds in the world there. Please also like her Birdgirl Facebook Page and follow her on Birdgirl Twitter. If you would like to contact Mya-Rose about her work, please e-mail helenabcraig@hotmail.co.uk.

Posted by birdgirl at 19:00 No comments: