Since I wrote my first blog post on 2nd December 2015 http://birdgirluk.blogspot.co.uk/2015/12/letter-to-bbc-wildlife-magazine-on.html, I have had lots of support. I really appreciate all of this; on Facebook Groups, my Facebook Page, Twitter and comments on my Blog.

Some of the advice has been given with really good intentions but without real understanding of the issues for girls like me.  Some people said that I should just appreciate how lucky I am to go on great birding trips (which I do), I should not worry about getting recognition (even though I only want recognition for what I and other girls achieve), I should stop blogging or having a presence on social media as that will stop the bullying (the bullying started way before I started my blog), that if I stopped trying to engage with people I would no longer feel let down and everything will be OK.  So basically all these problems have happened because I tried to have a public profile and brought it upon myself. I think this is genuinely what a lot of birders think, believing that they have a modern outlook.

Some people did say "bullying is bad" but didn't actually say "I'm sorry that happened to you" before being critical. Someone went further to tweet that the young birders group which they were member was not involved. Despite messaging to say this was not true she didn't correct herself. If someone doesn't want to support me, unless are being rude to me, I don't care. But do I have to ignore things that are untrue?


Sometimes I do think about stopping it all, but I realise that all the backlash will carry on even if I stopped birding, ringing, talks, conservation projects, blogging and my social media accounts.  Then all that would happen is that all these people (as women can be sexist too) would be saying “I told you she wasn't really interested in birding, it was her parents forcing birding on her and I knew she would stop in her teens”.

I think that sexism in birding and nature conservation is there because these areas are still dominated by men, even if there are more women than there used to be.  People tend to like and respect people like themselves and that is the reason why young male birders are able to find prominent mentors from the nature conservation sector.

Women in higher roles are often trying to juggle work, sexism at work themselves  and a family life and just don't have the time for mentoring.

In this article I want to focus on the nature magazines. I have nothing against these magazines and at times they have been personally supportive of me.  However, just being nice to me and a few other female birders is not enough, they still need to ensure that men and women are being recognised fairly and that they understand the strong influential role that they play.

BBC Wildlife Magazine has a female editor, but I think if you always do things in the same way, things don't change. In May 2015, they had a big piece on ‘The Wildlife Powerlist – Britain’s Top 50 Conservation Heroes’. The write up said "Who has the potential to change the fortunes of wildlife and the way we experience the natural world over the next decade?  We asked a team of experts to nominate conservationist, scientists, broadcasters, artists and writers to identify the 50 most influential people in British Wildlife…" 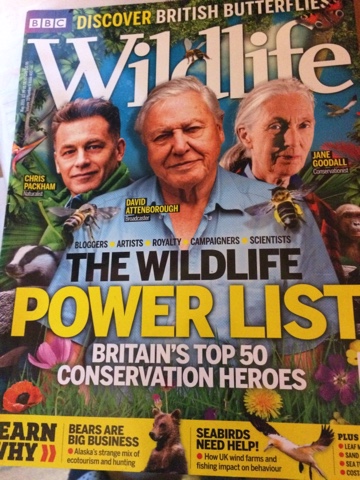 The 50 were chosen by the magazine’s advisory panel of 30 middle aged men (or older) and 2 women (again older) and ‘other’ experts.  I would like to know who the other experts were and whether there were more men than women.  The result was that only 12 out of 50 chosen were women, with 2 out of the top 10 being women.  Jane Goodall was number one, but no one can argue with that? How can that be accurate, with so many women involved in the conservation sector? Was the outcome because it was men who voted or was it because women are not recognised for what they do? Maybe because they don't shout about what they are doing as much as men?  I think next time, they could try to focus on coming up with female names, who are as good and powerful as the men.

This month Birdwatching Magazine featured an article “Bird Watching, The Next Generation – Meet the young birders making a difference” which was in conjunction with the BTO. On the front page was a teenage girl looking through a telescope, which looked promising.  First a 4 page article by 24 year old wildlife photographer Luke Massey on a trip back to his roots in France.

Then a 6 page article from the BTO’s Ieuan Evans on how young birders can get involved with BTO and other projects (great, I have been ringing and doing nest box surveys for 4 over years). On page 1 was a photo of a girl ringing and on page 6 one of a young boy birding.  It’s good to have the photo of a girl but it would have much better if a woman from the BTO had written the piece.  The BTO has lots of capable women.

Then a ½ page article by Findley Wilde age 13 year old on his concerns on conservation.

Then finally, a 4 page article by Nicola Boulton about working as a wildlife guide and photographer in Western Scotland.

So of the articles, 1 out of 4 are written by a woman.  It was good that there were two photos of girls birding and ringing but this is bit shallow if they are not given the chance to write.

Then there are a number of young  people, under the heading “One to Watch”.  I know most of them and they are great birders in influential in our field.  I am not saying that they didn't deserve to be listed but I don't think they are the only possible people that could have been included in this category. There was only 1 girl out of 7 people. This is my main issue.  Were these people chosen by the BTO or the magazine?  There are lots of amazing young female birders/ringers out there and I think this was a missed opportunity to showcase more of them.  I know from Twitter that the magazine certainly was told about lots of them.


There are situations where even if there isn’t actual sexism, there is an inequality between men and women in birding and nature conservation.

Are the number of women who come into our field impacted by the fact that it appears to be dominated by men?

Would there be more women taking up the hobby, if women were more visible?
Birdwatch Magazine Birders’ Choice Awards 2015

Again I personally have a good relationship with the magazine and so my comments are not meant to be taken personally by them or anyone who won.

Birdwatch Magazine announced their awards in October 2015 and anyone could vote on-line.

Four categories were for people:

Results were announced on 27/12/15, with all the winners being male, who I am not at all disputing their winning.

Conservation Hero - Chris Packham, winning outright
Local hero – Nominated by readers, the magazine highlighted 11 men/2 women, with the winner being a man
Blog of the year – Mark Avery, winning outright with a woman second (me!)
Book – Martin Garner, which was particularly lovely as he died not long afterwards

Why are those at the top dominated by men?  Is it because there aren’t enough women, so they don’t get to the top or is it because men are promoted more than women? Particularly our female nature presenters? Where are they? Where are my role models? Where are my mentors?

Our nature media has to be more inclusive and balanced, publishing writing from men and women and be ethnically diverse where possible.  Following my approach to the 4 big NGO’s on the issue of ethnic diversity, the RSPB and The Wildlife Trusts have been using images of ethnic minority children and young people.  This is something the nature magazines need to focus on as well.

I hope the next time articles like this are written, women are fairly recognised and represented.

Mya-Rose Craig is a 13 year old young birder, naturalist, conservationist, environmentalist, activist, writer and speaker. She is based near Bristol and writes the successful Birdgirl Blog, with posts about birding and conservation from around the world. She loved seeing Mountain Gorillas in East Africa and Penguins in Antarctica over Christmas 2015, her 7th continent.

Mya-Rose is a Bristol European Green Capital Ambassador along with Kevin McCloud, Hugh Fearnley-Whittingstall, Tony Juniper, Simon King, Miranda Krestovnikoff and Shaun the Sheep! See the full list of Bristol Ambassadors. She has also been listed with the singer songwriter George Ezra and actress Maisie Williams from Game of Thrones as one of Bristol's most influential young people. Please like her Birdgirl Facebook Page and follow her on Birdgirl Twitter